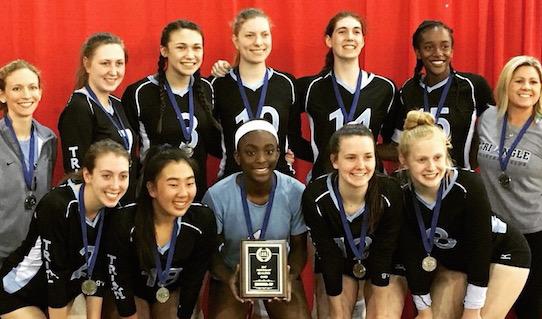 Getting to Philadelphia for the Northeast Qualifier [NEQ] had its challenges. But a canceled flight and tough back-to-back with The Big South National Qualifier just the weekend prior was not going to stand in the way of this young team achieving one of its many goals this season.

Triangle 15 Black began NEQ as the overall third seed after falling just short of qualification at Big South with a 7th place finish. Determined to achieve a different outcome at NEQ they began day one with two solid 2-set wins in pool play and setting up a showdown with Metro 15 Travel. The match with Metro went three sets; 15 Black ultimately triumphed [19-25, 25-18, 15-12] to win their pool. Day 2 would put them in a pool with EC Power [PA], Madfrog [TX], and Rockwood Thunder [MO]. A repeat performance of day 1 puts 15 Black with two 2-set wins and a battle for first place in the pool with undefeated Rockwood Thunder. The match is close but 15 Black falls in two given them second place in the pool but a birth in the 4-team Gold pool on the final day of play. The bid to USAV GJNC's is secured on day two as both Rockwood Thunder and Texas Advantage had previously qualified this season.

Not settling for qualification alone, the team embarks on its Gold pool against overall number one seed Texas Advantage. In an exciting 3-set match Triangle comes up just short [20-25, 25-20, 15-7]. In their second match they turn the tables and defeat Rockwood Thunder in two sets [25-21, 27-25]. Their final match is a repeat against Metro 15 Travel which they drop in three sets [15-25, 25-23, 15-6]. The resulting three-way tie for second place falls to Triangle based on set percentage and the team secures a solid second place overall finish.

Triangle 15 Black's qualification earns them one of thirty-six spots in the prestigious Open division of USAV Girls' Junior National Championships. The event will be held in late June in Minneapolis, MN.