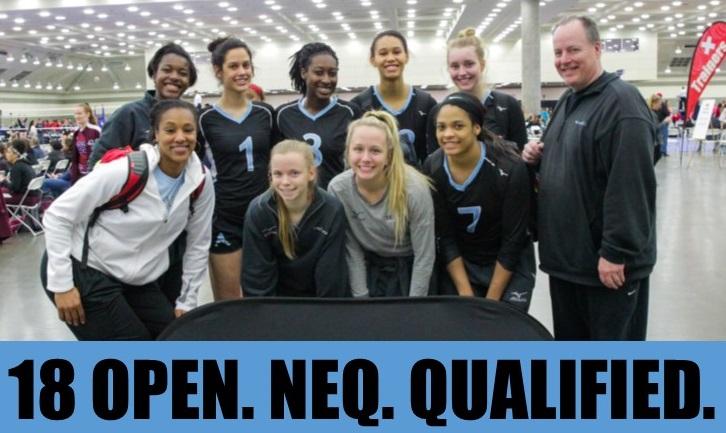 18 Black headed to Baltimore to compete in the Northeast Qualifier seeking an Open division bid to the USAV 18s Girls Junior National Championships. With the Open division being the most competitive and full of some of the best teams in the country qualifying would be no small feat. 18 Black were one setter down heading into the event and unfortunately on day 1 their only remaining 'true' setter was taken out by a concussion. The team fought through day 2 to land in the Silver bracket on the final day of competition. With three total bids to award and three previously qualified teams in Gold, 18 Black was still in line to earn a bid. To do so would require them to defeat Paramount (a 3-set MAPL loss for 18 Black earlier this season). With one of the team's liberos and an outside hitter setting a 6-2 they took the court. The lineup had numerous players in different positions than typical - they had a middle playing 6 rotations and lost a primary passer to the role of setter. Without question the odds were stacked against 18 Black, but they jumped on court determined to give it their all. When the final whistle blew, they had battled through three sets to win against a powerful Paramount team (25-22, 22-25, 15-12). They had qualified, but this crew decided that wasn't enough. In the Silver bracket final the match up was a weary but determined band of eight against EC Power 18-Royal (ranked 68th nationally vs. 73rd for Triangle). After dropping the first set, Triangle battled back to get the second and third sets (21-25, 25-22, 15-12) and finish in fifth place overall.

Triangle 18 Black will play for a national championship in Dallas in late April.