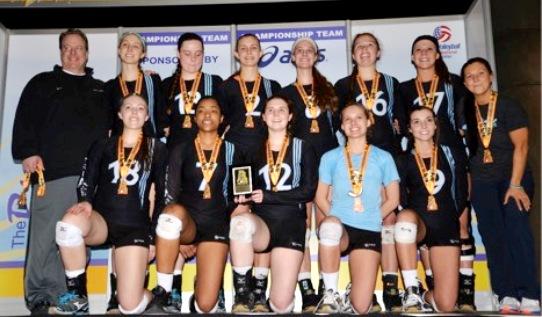 Triangle 18 Blue had among their goals this season qualifying for USAV Junior Nationals to be held in New Orleans this summer. Most of the members of 18 Blue had been close to qualification before…very close…but denied on the final day of competition.

For the 2015 season they would have three shots at qualifying; Mideast Qualifier [Indianapolis], Big South [Atlanta] and Disney Volleyball Showcase [Orlando]. Eleven strong and united in a single purpose Triangle 18 Blue started with a bang in Indianapolis going undefeated through the first two rounds of pool play and landing in the 16-team strong Gold bracket on Sunday. Up first was Top Select 18 Elite, a perennially strong club from Florida. Top Select proved too much to handle and 18 Blue fell to finish T9 and out of range for the USA bid they sought after.

Next up was Big South. Undaunted they went into day one against a tough field. Landing top ½ after going 2-1 in first round pool play. Day two would put them in a pool with, yep, Top Select again. They would need to finish in the top two to advance to Gold bracket play on Easter Sunday. Top Select proved too difficult to overcome but 18 Blue toppled USA South 18 National is a tight three-set match (25-10, 15-25, 17-15). To stay alive for Gold 18 Blue was in a must win situation with Colorado Classix Juniors. Again, 18 Blue found themselves in a three-set battle; ultimately winning (24-26, 25-17, 15-9).

The Gold bracket stage was set; 12 teams and 3 bids on the line. To qualify 18 Blue would need to push through the bracket and finish third or higher. First match was at 8am vs. Tampa Elite U18 Columbia. Again, it is decided in three sets with 18 Blue triumphant after a slow start (17-25, 25-23, 15-12). At 9am they faced off against Momentum 18 Black. They win in two (25-23, 25-19) to set up a semi-final showdown with a perennial Top 25 favorite Wave out of San Diego. A win grabs a  bid...a loss will force yet another match in an attempt to secure third place.

Interestingly enough Wave 18-1 was coached last season by 15 Black’s Coach Courtney Noll proving yet again the volleyball world is a small world indeed. Wave has an outside hitter committed to Hawaii, and a libero committed to UNC. It was a formidable battle. Going in Wave’s favor and settled in two (25-20, 25-23) it was a battle nonetheless. Not discovered until Monday, Jaclyn Brewington [Setter] sustained a broken nose in the match.

With no break, they play on. The 3rd place match has 18 Blue facing off against Texas Fusion 18-1. Both teams were playing their fourth straight game Easter morning. The match is lopsided with 18 Blue winning game one only to lose decisively in game two. Both teams face yet another game three, again with a bid on the line. Triangle 18 Blue would not be denied. They started the game strong leading decisively at the switch. They took point after point and ended winning both the match and the USA bid 15-7.

18 Blue’s qualification is the first-ever for a Blue team [or any non-Black team]. It speaks to the considerable depth of our club, caliber of athletes, and the hard work each and every athlete and coach brings to the court each day. KUDOS 18 Blue…we are impressed!