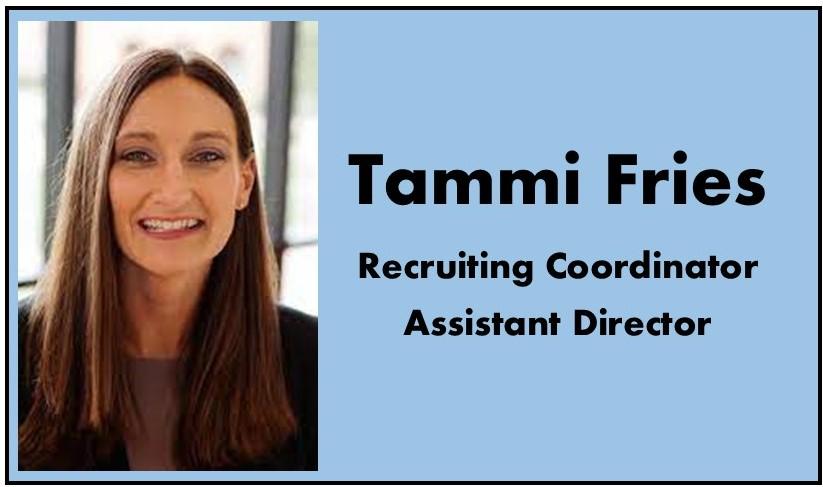 October, 2021 - Triangle is pleased to announce that Tammi Fries has joined Triangle's administrative team full-time as an Assistant Director and Collegiate Recruiting Coordinator. Fries brings a wide array of experience to her position including a four-year collegiate playing career, nine years of collegiate coaching and recruiting, club management, as well as club and prep-level coaching.

"I am very excited to join Triangle's administrative team and help lead a nationally recognized club that I have known and respected for many years. It is a special privilege to join Triangle in its 20th season and fulfill a role that allows me to do something I thoroughly enjoy; helping and encouraging athletes through the college recruiting process", said Fries.

Fries (Batson) was an opposite hitter and four-year letter winner for Campbell University's Fighting Camels. She was voted MVP in 2002 and served as team co-captain in 2003. She earned academic all-conference honors all four years, graduating Magna Cum Laude in 2004 with a Bachelor of Science in Athletic Training. Upon graduation Fries attended University of Florida where she earned a master's degree in sport management while also teaching volleyball physical education classes to undergraduate students. While in Gainesville she coached both club (Gainesville Juniors) and high school (Buchholz HS) volleyball and also served as an operations intern for the Florida Gators women's volleyball team in Spring 2006.

Fries began her collegiate coaching career at East Tennessee State (ETSU) serving as both an assistant coach and recruiting coordinator for five years. Her recruiting efforts on behalf of the Buccanneers saw the 2010 ETSU Recruiting Class earning PrepVolleyball.com honorable mention among top recruiting classes in the nation.

From ETSU Fries went on to Southern Illinois (Carbondale) where she served one year as an assistant coach before returning to North Carolina to serve as the assistant coach at Queens University of Charlotte. Fries was promoted to Associate Head Coach in 2013 - the same year Fries received AVCA's prestigious "Thirty under 30" award recognizing up and coming coaching talent at all levels in the sport. Fries also held positions on AVCA's Assistant Coaches Committee, Division II subcommittee, and the JVA subcommittee.

Prior to coming to Triangle full-time, Fries served her alma mater for five years as Campbell's Director of Annual Giving in the Institutional Advancement department and as a volunteer assistant for Campbell's Women's Volleyball program.

"Tammi brings tremendous experience and knowledge to our administrative team and will be a strong advisor and supporter to our athletes as they pursue collegiate placement to advance both their academic and athletic goals," stated Triangle's Executive Director Sherry Fadool.