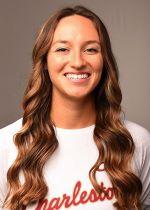 Beckman returns home to Triangle where she played club for the 2012-2015 club seasons and was also a standout setter at Apex High School. During her club career, Beckman set 18 Black to an Open bid to USAV Nationals in 2015 after a top finish at the Big South Qualifer. At Apex she played varsity for four-years, leading the team to conference titles in 2011, 2012, and 2013. She earned Second Team Under Armour All American honors and was selected to The News and Observer’s All-Metro team in 2013.

At College of Charleston [CofC] Ally was an immediate contributor and is among a short list of CofC freshman to eclipse 1,000 assists in a single season. She earned Colonial Athletic Association (CAA) All-Rookie Team and All-CAA Third team honors both her freshman and sophomore years. Her junior year she earned AVCA All-East Region Honorable Mention and was named CAA Setter of the Year and All-CAA First Team honors. Her senior year play led her to being ranked third in the nation in total assists as she surpassed the 5,000-assist career mark and earned All-CAA Second Team honors.

Beckman is an equally capable sand player having qualified twice for USA Beach National Tour and being named Carolina Region Junior Beach Volleyball U16 Player of the Year in 2012. At College of Charleston Beckman excelled in the beach for all four seasons. She is tied for second in all-time career wins and earned AVCA Top Flight recognition at four’s her senior year. She finished her career with the fifth best career winning percentage (0.629).

Beckman graduated CofC in 2019 with a Bachelor of Science in Exercise Science and is planning to attend PA school in the future. Since returning to Triangle as a member of the coaching staff, she has been the 16 Black assistant and led high level setter training and clinics.