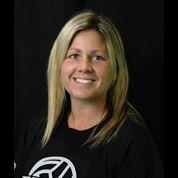 Godbold (formerly Kearns), hails from the Raleigh area and is a graduate of Apex high school where she was a standout athlete and varsity letterwinner. In 2010 she captained Apex High School to a 27-0 season, 4A state championship, and a No. 9 ESPN National Ranking. She was named AVCA Under Armour All-American Honorable Mention and prepvolleyball.com All-American as a senior. After graduating, Godbold went on to compete as libero/defensive specialist at NC State. She earned a bevvy of all-tournament awards throughout her four years with the Wolfpack and finished her career at NC State in the top five for all-time digs. Godbold was featured on ESPN Sportscenter Top 10 Plays of the Day in 2013 for a defensive save play where she kicked the ball backward from an endzone to recover an errant pass.

Godbold played libero for five years at Triangle including two years on Triangle 18 Black (2010 and 2011). In 2010 Godbold helped 18 Black earn two consecutive Open bids to USAV Junior Nationals, including a double qualification in 2010 when the team finished second at the Mideast Qualifier and won the championship at the Lone Star Classic. In 2011 she led 18 Black to a third-place finish at the Big South Qualifier, qualifying in Open for the second consecutive year. In 2011, 18 Black finished 13th at USAV Junior Nationals – the highest finish in the Open Division of any North Carolina team in history.

Godbold served as a student apprentice coach during her time at Triangle and officially joined the staff in 2010. She has been an assistant coach of 14 Black, 15 Black, and 16 Black. In 2014 she helped lead 16 Black to the 16 Open championship match at AAU Junior Nationals. This was Triangle’s first appearance in an open division national championship match along with Triangle’s highest finish at AAU Junior Nationals. Additionally, Godbold served as an assistant coach in 2016 with 15 Black, who received Triangle's first ever at-large bid in the Open Division at USAV Junior Nationals. She also helped 15 Black to earn an Open Bid at Northeast Qualifier in 2017. Most recently in 2021, Godbold head coached 15 Black to an Open Qualification in 2021 at The Big South Qualifier. In three Open qualifier appearances they finished 5th at Sunshine Qualifier and The Big South and finished 3rd place in Open at Northeast Qualifier. The team won the 15 Open division at the JVA World Challenge. 15 Black finished the season ranked 11th in the nation by PrepVolleyball.com.

Godbold is also currently coaches at Green Level High School. In her second season in 2020/2021 Godbold was named Tri-8 Coach of the Year.