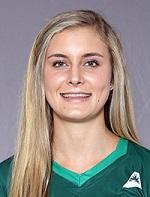 Schmid is back at Triangle where she played club for two seasons as a middle blocker. Schmid was a member of Triangle 18 Blue, who "double qualified" for USAV Nationals (3rd place Big South, 1st place Disney Volleyball Showcase). Schmid was a stand-out at Franklin Academy; recording 500 career kills and earning First-Team All-Conference and MVP her junior year.

Schmid was recruited to Robert Morris University and played two seasons for the Colonials before transferring to Stetson University. At Robert Morris, Schmid led her team and ranked 5th in the NEC in blocks (97) and 9th in attacking (.237). She helped the Colonials earn an appearance in the NCAA Division I tournament.

At Stetson, Schmid started in every match her junior and senior year. Her junior season she ranked 7th in blocks in the ASUN conference. Her senior year she reached a ranking of 6th in blocks and 5th in attacking percentage. She earned ASUN Player of the Week honors and was on the ASUN Academic Honor Roll both seasons.

Schmid has coached for Triangle at their Town of Wake Forest satellite program and for clinics hosted at Stetson University.

Schmid graduated in December, 2019 from Stetson with a BS in Health Sciences and earned her Masters in Teaching - Elementary Education in 2021. She is currently a third grade teacher at Fox Road Elementary in Raleigh.