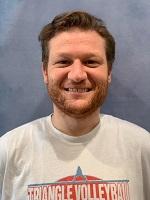 Our hearts were deeply saddened when we lost CJ (Ceej) on February 8, 2021. His memory, spirit and love of all things volleyball will forever live in our gym. He will always be a part of Triangle and his bio will remain in its space.

Hunter joined Triangle's coaching staff in 2013 and served as a resource, assistant and head coach at ages 13s-17s. In 2018 Hunter's role was expanded when he was hired as an Assistant Director; bringing a wealth of sport's administrative experience to Triangle's professional administrative team.

Hunter received a Master's degree in Sport Administration from UNC-Chapel Hill's Exercise and Sport Science department in 2015. While at UNC he worked in the Tar Heels’ Athletic Communications office, handling media relations and game day operations for the UNC Women's Volleyball team. In 2015, Hunter returned to his undergraduate alma mater, Duke, to serve as the Duke Women's Director of Volleyball Operations. In this role at Duke, Hunter handled numerous aspects related to sports administration including community event and game/tournament coordination, camp administration, department budget management, team travel, marketing and promotion.

Hunter was the 2016 recipient of Triangle's Sam Casey Caram Excellence in Coaching Award, which is presented to the coach who best demonstrates exemplary dedication and commitment to the mission and goals of Triangle Volleyball Club. Prior to coaching at Triangle, Hunter coached at Surry Storm Volleyball Club in his hometown of Mount Airy for five years.

Hunter is also a graduate of Duke University, where he pursued his passions in education as well as volleyball, earning a bachelor's degree in Political Science in 2013 and working closely with the Duke Women's Volleyball program as a student manager.