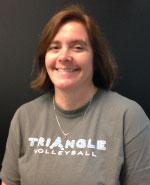 She has been the head volleyball coach at North Carolina School of Science and Mathematics for the past 18 seasons. In 2011 Davene led her team to become the 1A East Regional champions and 1A State Runner-ups. Her colleagues voted her the Conference Volleyball Coach of the Year in 2014 and 2018. She is an Accredited Interscholastic Coach, Gold Medal Squared certified, and Art of Coaching Volleyball Head Coach certified.

She has served as the head coach of 14 White and has also been an assistant coach for 14 Blue, 14 White, and 15 White where in 2012 leading 15 White to an impressive season match record of 43-3 and game record of 87-8. Originally from the Chicago area, Davene is a graduate of Purdue University. She works as a Quality Assurance Engineer and lives in Chapel Hill with her husband. The couple have three adult aged children, one of whom (Julia) also coaches at Triangle.