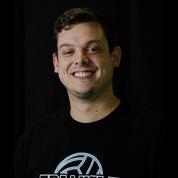 Hermanson, originally from Ventura, California, played four years of high school volleyball. He attended UNC Chapel Hill, where he majored in history with a minor in geography, graduating in 2013. Hermanson continued to pursue his volleyball passion by playing for the UNC men's club volleyball team and helped them to a fifth-place finish at the 2012 NCVF National Tournament. As an avid beach player, Hermanson first got involved in coaching by working summer beach volleyball camps for the city of Ventura’s Recreation Department from 2009-2011. During his time at Triangle, Hermanson has worked with ages 14-18, assisting with 14 Blue in the 2013 and 2014 seasons and Head coaching 15 White in 2015 and 2016. In 2017 Hermanson was head coach of 16 White, which finished T-9 at AAU Junior Nationals, the highest finish for a White team in Triangle history. Most recently for the last two seasons, Hermanson served as the head coach for 17 Blue. His 2019 17 Blue team reached unprecedented heights with multiple T-5 finishes at qualifiers, a third place finish at JVA Summerfest, and 12th place at AAU Nationals. In 2020, he coached Triangle 18 Blue during the shortened club season.

In addition to his club coaching experience Hermanson spent 2013-2015 as a coach at Cardinal Gibbons High School in Raleigh, helping the Crusaders win three consecutive state championships. In 2016 Hermanson earned a master's degree in teaching from NC State and is currently teaching American History and head coaching varsity volleyball at Broughton High School in Raleigh. He was named the CAP-7 Coach of the Year in 2019 and helped lead Broughton to the Final 4 of the NCHSAA 4A State Tournament in just his first year as the head coach.