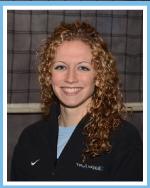 Whitsett graduated in 2010 from Elon University with a bachelor's degree in English. Whitsett was a four-year letter winner as a setter at Elon and served as captain both her junior and senior year. She earned the coach’s award in 2010, Academic All-Southern Conference, and Athletic Director Honor Roll. Whitsett originally hails from Pittsburgh and played four years on the Pine-Richland High School varsity team. In 2005 she led her high school team as captain to a state championship and was named all-state as a senior. She played for both Renaissance Pittsburgh Volleyball Club and Pittsburgh Elite.

At Triangle, Whitsett has served as an assistant coach of 15 Black and 16 Black and head coach of 15 Black. In 2014 Whitsett led 16 Black, as the interim head coach, to a second-place finish in 16 Open at AAU Junior Nationals, the highest placing team in Triangle’s history at AAU Junior Nationals. In 2016 she coached 15 Black, which earned an at-large Open bid for USAV Junior Nationals and marked the second time a 15s team at Triangle qualifed in Open and the first time a Triangle team has earned an at-large bid. In 2017 she led 15 Black to qualify in Open for USAV Junior Nationals after a second-place finish at the Northeast Qualifier and a fourth place finish at the Northern Lights Qualifier.

Whitsett resides in Raleigh with her husband, Uel, and their daughters, Stella, Hattie and Evey.