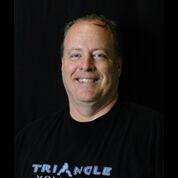 Freeman, a native of Pittsburgh, graduated Magna Cum Laude from Liberty University before moving to the Raleigh area. Freeman served as head volleyball coach and assistant director of athletics at Cardinal Gibbons High School in Raleigh from 1991-2010. During his 19 years at the helm of the Crusaders, Freeman led Cardinal Gibbons to 10 state championships and 12 conference titles. His career record at Cardinal Gibbons stands at 426-117 (.785), a mark that also includes 12 consecutive appearances in the state championship. Most recently, Freeman spent five seasons as the varsity head coach at Broughton High School where he lead the Capitals to three consecutive conference championships. Throughout his career Freeman has coached over 30 NCAA Division I athletes, including several NCAA national champions and multiple NCAA All-Americans.

Freeman began his tenure with Triangle volleyball club in 2004 and has coached teams in the 13s, 14s, 17s, and 18s age groups. In 2015, he led 18 Blue to it's first double qualification season winning the Disney Qualifier and finished 3rd at Big South. The following season, 18 Blue repeated the feat, winning Beast of the Southeast and finishing runner up at NEQ. Freeman helmed 18 Black for three seasons, where he coached two youth National team participants, and notched an open level qualification in the 2019 season.

Most recently, Freeman served as the head coach of 17 Blue and worked from 2019-2020 at Duke University as the Director of Volleyball Operations. Freeman previously worked with the Blue Devils during their 2010 season as a volunteer coach. During that season, he assisted with the analysis of team and opponents and helped the the Blue Devils to an ACC Championship and an Elite Eight appearance in the NCAA tournament.