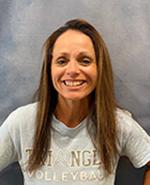 De Oliveira joins Triangle with over twenty-five years of volleyball coaching and playing experience. Originally from Utah, De Oliveira was a three-sport athlete playing volleyball, basketball and softball. She earned All-Conference and All-State team selections in all three sports each year of her high school career. Volleyball quickly became her passion which she has turned into a successful coaching career at both the club and high school levels, as well as in the beach game.

De Oliveira also serves as the varsity assistant coach at Durham Academy where she helped the team earn a final four appearance in 2018 and land in the state championship finals in 2019. De Oliveira’s coaching passion extends to the beach game where she serves as a year-round beach coach at Sinjin Beach-Raleigh. She is also involved in coaching p1440 elite junior beach athletes under the direction of Kerri Walsh.

De Oliveira and her husband, Adam, live in Cary with their five children, Miranda, Nicole, Junior, Josh and Jacob.