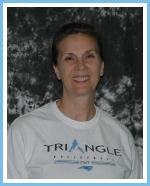 Wands joined Triangle in 2011 and has over a decade of coaching experience at the middle school, high school, club, and collegiate levels. She has multiple coaching certifications including USAV CAP I and II, USAV Beach, and Gold Medal Squared Level 1. Wands has served as the head coach of 15 White and now serves the club in a vital capacity as a mentor and lead coach in the 11s and 12s age groups, in addition to coaching her own team in this group.

Wands served as the varsity head coach at Raleigh Charter High School from 2009-2012. In 2012 she led Raleigh Charter to become the 1A East regional champions and state championship runners-up.

Since 2013 Wands has served as the program director for Cary Parks and Recreation youth volleyball, teaching skills classes, summer camps, and managing the league program.

Originally from Syracuse, New York, Wands played collegiate volleyball at Genesee Community College. She is retired from US Airways and lives with her husband in Apex.