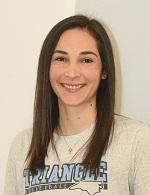 Panzl is one of Triangle's PowerCore 360® certified instructors and along with Coach Robin Bugg leads development and delivery of Triangle's PowerCore 360® curriculum. Panzl also serves as the Injury Prevention Coordinator for Triangle Volleyball Club. She serves as the on-site licensed physical therapist with Trinity Wellness Center where she specializes in orthopedics and sports medicine for Triangle athletes and coaching staff, their family members, and any other personal referrals. As an FMS™ Level 1 and 2 Certified screener, Panzl also organizes and oversees all annual FMS™ evaluations and initiatives.

Panzl (Fadool) was a redshirt freshman at Wingate University prior to transferring to UNC for her sophomore year. Panzl played five years for Triangle as a middle blocker/opposite hitter and during her senior year she was a member of the 18 Black team that “double-qualified” for USAV Junior Nationals in the Open Division. Panzl also helped Cardinal Gibbons High School earn two state championships in 2007 and 2009 where she earned all-conference honors her junior and senior year. During her junior year Panzl was co-recipient of Triangle’s esteemed Board Award.

In 2022, Panzl was selected as one of 100 coaches nationally (all sports) as a Regional Winner for the PCA Double-Goal Coach® Award.

Panzl graduated from UNC Chapel Hill in August 2014 with a dual degree in Exercise and Sports Science and Psychology. In 2019, she graduated from Elon's Doctor of Physical Therapy program and is on staff at Trinity Wellness Center in Raleigh. She and her husband Joe and their dog Shadow live in North Raleigh.