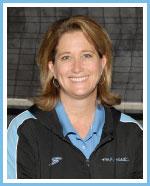 Hailing from Texas, Bugg brings a wealth of playing and coaching experience to Triangle. As a middle blocker and three-time captain at the University of Tennessee (1980-1983), Bugg led her team to two SEC championships and three top 10 finishes in the NCAA tournament. The three-time All-SEC selection still holds several records at her alma mater, including career aces, career blocks and most blocks in a match. Bugg was inducted into Tennessee's Lady Vol Athletic Hall of Fame in 2005.

From 1992-2000 Bugg served as co-director and head coach of the North Dallas Juniors Volleyball Association. During her time with North Dallas she helped over 80 student-athletes earn athletic scholarships and won several North Texas Region and Tour of Texas championships. Over her coaching career, Bugg has qualified 18 teams to USAV Junior Nationals.

In total, Bugg has over 35 years of coaching experience at the middle school, high school, club, and collegiate levels. She has served as head coach of high school programs in Texas, Utah, and West Virginia, and has 22 years of club coaching experience. Bugg has served as the head coach of 18 Black, 17 Black, 16 Black and 15 Black. Her 2010 18 Black team became the first team from North Carolina to “double-qualify” in 18 Open at USAV Junior Nationals; she led them to victory at the Lone Star Classic and a T-15 finish at Junior Nationals. In 2011 she led 18 Black to a third-place finish at the Big South Qualifier, qualifying in Open for the second consecutive year. In 2011, 18 Black finished 13th at USAV Junior Nationals – the highest finish in the Open Division of any North Carolina team in history. In 2012 Bugg led 17 Black to qualify in Open at the Lone Star Classic by placing third in the tournament. This was the first ever Open bid at the 17s age group in Triangle history. In 2019, Bugg led 17 Black to a second place finish at Northeast Qualifier and earning a bid to USAV Nationals.

Bugg leads the development and delivery of Triangle's PowerCore 360® programs.