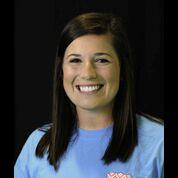 Patterson is originally from Roanoke, Virginia but relocated to the Tampa area in 2010. Patterson grew up around volleyball as her mom played in college at East Tennessee State and her dad was a coach. She began playing volleyball in 5th grade and played club at Tampa Bay Juniors and Tampa United. After the family returned to Roanoke her junior year, Patterson played for Roanoke United.

While attending Hidden Valley High School, Patterson was named a two-time Virginia All-State honoree. Patterson was recruited as a setter to James Madison University where she is ranked in the top five for career assists and assist average and in the top 10 for single season assists and assist average. As a senior Patterson was named All-CAA Second Team and was selected for the JMU Athletics Director Scholar-Athlete Award. Patterson graduated from JMU with a bachelor's degree and a master's degree in elementary education. She moved to Raleigh in 2017 to teach 2nd grade at Horton’s Creek Elementary in Cary.

Patterson has considerable coaching experience including numerous summers at JMU volleyball camps and high school satellite camps. She has also coached at Hidden Valley High School and Roanoke College camps. While working on her master’s degree at JMU, Patterson served as an assistant coach for the 15-1 team at Roanoke United. During her time at Triangle, Patterson has been the assistant for 17 Black, 15 Black and 15 Blue. In addition, she brings high-level training and knowledge of the setter position to the gym, and has been the lead for many setting camps and clinics.